Everytime I am in Jogja, Mom always takes me there and lets me play around. I love to play seesaw and snake-like thing. I can climb on it and speak at the edge of the snake and aunt Tyas and uncle Heri answer at the other end, just like having a phone call. It was fun indeed. Next time I want to enter the pre-school class and see what there is because last time it was already closed. I tell you later yah!
Posted by kaka at 2:07 AM

It was an exhausted early morning, when I have spent the night to take care of my wife. It seemed to be her time to deliver the baby. I was rushing out with my bike to catch a taxi for her. I stopped one in a crossroad nearby. The taxi followed me home to take my wife who was in great pain. The taxi run fast across the road to the hospital and I followed it behind. Not long after that, we arrived at the hospital and took care of the administration for a couple of minutes and moved to "IGD" to find my wife there, still in pain, but I couldn't find the taxi driver to pay for the fare. Where was he? Well, I was stunned to see the taxi driving away aut of the hospital. How come? I run after it, trying to shout out loud to stop it. The taxi slowed down before me, then the glass of the from door opened, and what I saw was only the right hand of the driver come out through the window glass with the thumb up, then the taxi moved fast again, left me there stood still trying to figure out what happened.
As far as I knew, It was the passengers who were usually runaway from the taxi (as a fraud action), but this was the other way around compared with what I experienced. My conclusion at that time was only that the taxi driver was a very good fellow and that's all. So, I wished him every luck in his life for helping me and my wife. But you know, it was not the only reason. He said there is a belief amongst drivers that if there is a delivering pregnant woman he will get a big luck. OH I see.. So, that was the case of what happened then.
Posted by kaka at 12:28 AM 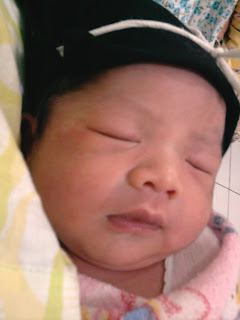 Yesterday night I couldn't sleep well. I was waiting for a good news. Aunty Nung and Father said that my lil bro would come out from Mom's belly. Wow, I couldn't wait to see him and play with him.
When I play with Aunty in the morning, Father told me by the phone that my lil brother had been born and was named ADIKA. Wow, I was so excited to hear that. But I have to wait for some time to see him because I am now in Semarang and he is still in a hospital in Jogja.
Posted by kaka at 9:02 PM

Kaka is fixing his new bicycle 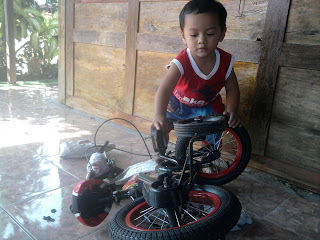 Kaka has a new bicycle. He is so happy with it. Nobody are not allowed to touch it but himself. Though he is not good enough to ride it, he is fond of it so much. He still learns to ride it because the sadle makes his feet quite too high to reach the floor. Aunty Tyas gladly helps him each time he wants to ride around the front yard. Sometimes he lays the bike down on the floor and pretends to be a mechanic fixing a broken bike and muttering his own words in his fantasy world.
Go go, Kaka! You can do it, boy!